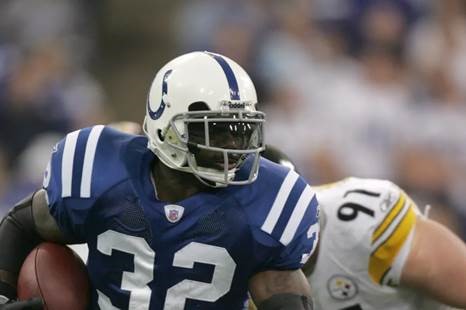 A Home-Town hero, from Immokalee, FL. James was recruited out of Florida’s Immokalee High School by the University of Miami. He proved to be one of the most successful running backs in the school’s history.

James ranks third in all-time University of Miami rushing yards. He was the only running back in school history to post two consecutive seasons with 1,000-plus rushing yards, and he ranks first in school history with the most 100-plus rushing games (14). All single season records held by James have since been broken by former Baltimore Ravens running back Willis McGahee.

Edgerrin was inducted into the University of Miami Sports Hall of Fame on April 23, 2009 at its 41st Annual Induction Banquet at Jungle Island in Miami.

For the second time, Edgerrin James, the greatest running back in Colts history, has been named one of the 15 modern-era finalists for the Pro Football Hall of Fame Class of 2018. He has the distinction of being the only running back to advance as a finalist in the 2018 class. The Hall of Fame Selection Committee will meet February 3, 2018, to elect the five players who will be formally enshrined in Canton.

James was statistically incredible, playing 11 seasons in total. He spent 7 of those with Indianapolis, and over the course of his career, amassed 12,246 rushing yards, 15.610 yards from scrimmage, and was named to 4 Pro Bowls.

Part of the “triplets” with Manning and Harrison, James made his mark on the franchise and the fanbase. “Edge” leads the Colts franchise in career rushing yards (9,226), rushing touchdowns (64), rushing yards per game average (96.1), rushing yards in a single season (1,709 in 2000) and most seasons with 1,000+ rushing yards (5).
Is this the year that James makes the cut and finds his way into the hall of fame? To be elected a player must receive a minimum vote of 80 percent during the selection meeting, and Harrison had to wait his turn before getting in last year himself. He would certainly be deserving of the honor, but only time will tell if this is his year.