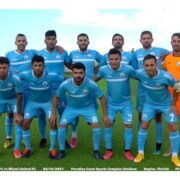 After a riveting season, Naples United Football Club (FC) of Naples, Florida, the town’s first semi-professional soccer team, has made it to the 2021 NPSL Sunshine Conference Semifinals.

The game is open to the public and tickets are only $10.

In the last game of the season against Boca Raton FC, Naples United tied 4-4 in the 95th minute. Both teams secured a spot in the playoffs. The top 4 teams qualify based on regular season PPG and will be seeded #1-4. Miami Dutch Lions FC sits at #2 seed and Naples United FC is #3 seed; Miami United FC (#1 seed) vs. Boca Raton FC (#4 seed).

Naples United rounded out the season with 5 wins/2 ties/3 losses, earning the 3rd position in conference rankings and 27th in the national rankings.