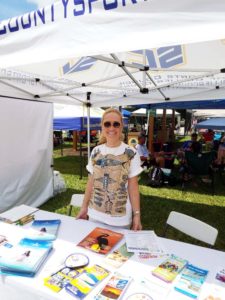 Lori Lou Waddell, board member of the Collier Sports Council, hands out literature to players and fans.

Naples’ Simone Jardim defeats Lucy Kovalova to take home the title of Women’s Pro singles title 11-2, and 11-1. It was her third US Open title championship in a row.

Ft Myers native Kyle Yates was defeated by Tyson McGuffin in three sets 11-5, 6-11, 11-4. McGuffin is the No. 1 ranked singles player in the world.

It was a sellout crowd with over 1,000 fans in the Zing Zang Championship Court on Sunday.

A full schedule is ahead with over 2,000 registered players.